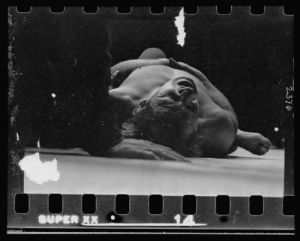 Wrestling with Bacon | Institute of Contemporary Arts | 14th May 2015

Wrestling with Bacon was a curated evening of screenings and talks which explored the links between popular culture in 1950s Britain and the more controversial subject matter of Francis Bacon’s early canvases.

Programmed to coincide with FB55, the event highlighted the juxtaposition between the accused subversiveness of Bacon’s paintings and the supposed normality of professional wrestling, Hollywood Movies, Victorian science and his contemporary art scene. It hoped to emphasise the potential homoerotic undercurrents in these influences and the weight of their impact on Francis Bacon’s output, all within a social milieu which outlawed homosexuality.

Keynote responses to the archive footage were given by artist Anthony Schrag and Jane Giles, Head of Content at the BFI.

Jane spoke about Jean Genet’s 1950 film Un Chant d’amour and potential similarities in the private lives of Bacon and Genet. Anthony, a performance artist, give a presentation of his work and research in which he explained his working relation to conflict and the role it plays in contemporary art with a particular emphasis on wrestling.